Here is a piece that I wrote and was posted on USIP’s website so I am cross-posting it here.  Also set forth below is a photo slideshow of the museum.  Here is the link to the article on the USIP website:

Transforming Conflict through Art in Libya

After being gutted by fire during the revolution, with the ground floor walls still bearing the scorched marks of conflict, Benghazi’s war and art museum had been created on the spot following the end of Muammar Qaddafi’s 42-year rule. In generations past, the building had been a luxurious palace dating centuries back to the era of Italian colonialism.

Benghazi sparked the revolution, but the city that looked modern on the surface, as I would learn, had been neglected for decades by the dictator for its role in fostering dissent throughout his reign. Driving around, I could see roads and buildings left as they essentially were in decades past. Yet underneath all this, was the heart and spirit of its people.

As we approached the museum, a car painted pink with flowers came into view in its courtyard, interspersed among sculptures and other items. As we entered the palace-turned-museum, we were greeted by Salwa Al-Tajoury, a charming and effusive Libyan who had painted the car.

As she guided us through the recently installed sculptures, paintings and exhibits, she told us how while residing in France, she became so moved by the stories of courage and valor coming from her native country, Libya, that she felt compelled to return to help her people free themselves from Qaddafi.

After the liberation of Benghazi, she met Ali Al-Wakwak, an artist, who under the former regime had been prohibited to work as an artist. She found herself captivated by Al-Wakwak’s unique art, sculpting of driftwood to create wonderfully expressive likenesses of Libya’s famous nomadic Touregs.

She was also impressed with the artist’s resilience and resourcefulness amid the conflict. During the violence, Al-Wakwak turned his skills and artistry toward crafting homemade weapons to help equip his out-gunned friends and neighbors in their battle to turn back the more heavily armored and well-financed arsenal against Benghazi.

Now that the fighting was over and Benghazi was free, Al-Wakwak pivoted back to being an artist, now using the detritus of war to sculpt artwork chronicling the horrors of it as well as the promise of humanity.

Salwa told us of how, after the heaviness she felt upon seeing so much death and destruction during the conflict, she saw Al-Wakwak’s transformation from artist to warrior back to artist, and how art could also be her pathway back from depression to humanity.

““It’s a very important message to the wounded, the people who lost their legs or an arm. They got depressed because they’re so young and they lost limbs. So he just wanted to give them the message that even if you are broken, your life is not over,” she told me. “Your life continues and you can be a part of the country. This is the message. That is why he loves the broken things because we all have this, like these failures and these scars inside.”

She added: “Art was my therapy. I was depressed before I did the car. When I did this car, I saw the smiles of the children once more and the people. And the energy I get, when you receive positive energy from people, it rebuilds you and you have the feeling to do something important.”

She said that when she returned to Libya, she was not prepared for what happened. She didn’t expect war. She thought it would be like what happened in Tunisia or Egypt. So when she saw the planes bombing people, the tanks firing indiscriminately into neighborhoods, and the mercenaries raping their daughters and wives, her vision of a peaceful transition to democracy was shattered.

She still hasn’t come to grips with the fact the violence is over. But despite what she witnessed, she was glad she had come back to play a role. Salwa felt that she was able to help her people in some small way and she could have never remained in the safety and comfort of her home in France while her people were dying and suffering for such a worthwhile cause.

Before leaving Libya, I returned to the Benghazi art museum. And there was Al-Wakwak, with his welder in hand, hunched over an object that he was forming, sparks flying everywhere. As I peered over his shoulder, I saw that he was putting the finishing touches on a donkey. On the ground was another sculpted figure standing proudly. I looked at the two and realized I was seeing Don Quxiote and his trusted donkey — constructed of bullets, casings, bearings and other military hardware — ready to tilt at windmills. I smiled at the symbolism.

So in addition to the fond memories of my visit to Benghazi and the museum, I have also brought home Don Quixote and his Donkey, a permanent reminder of the power of art to transform conflict.

Here is a blog on my recent trip to Tripoli posted on the website of the United States Institute of Peace (USIP): http://www.usip.org/in-the-field/new-and-optimistic-libya-struggling-its-feet

The moment I learned the gun battle erupted down the street from my hotel, my mind started racing with the implications it could have on Libya’s tentative steps toward its new chapter.

I was just wrapping up a trip to the newly dictator-free North African country. My colleague Vivienne O’Connor and I had been in the country to work with our Libyan colleague Najla Elmangoush and Lebanese colleague Ali Chahine and offer our assistance and experiences working in transition countries. We were also there to conduct workshops on rule of law and justice in the country where — until so very recently— both were foreign concepts.

We traveled the coastline from Benghazi, the birthplace of the revolution, to Tripoli, then to the rebel towns of Zawia and Misurata that came under heavy attack by Qaddafi forces, as he struggled to put down the revolution spreading across Libya.

Everywhere we went, we encountered enthusiastic and energetic Libyans, eager to experience the freedoms and challenges of good governance in a country where none had existed before. They understood that their chosen path was not an easy one. In fact, just the day before our arrival in Benghazi, the governmental headquarters of the new National Transitional Council (NTC) had been overrun by a mob of protestors. They cited frustration with the slow pace of reform and the lack of both transparency and inclusiveness of the deliberations of the new transitional leadership.

As we arrived in Tripoli, news circulated of torture of Qaddafi fighters held in Misurata prisons. And there is widespread anxiety over what is seen as a growing criminal element in Tripoli in a country already awash in weapons.

At the same time, there are a large number of fortified checkpoints and armed militias still occupying the country’s streets—equally fearful of a return of Qaddafi loyalists as being left out of the emerging power structure. But despite these significant concerns and challenges, a spirit of optimism prevailed on the streets of Libya.

We were asked on multiple occasions to pass along the Libyan people’s thanks and gratitude to the people of the United States, and specifically to President Barack Obama for coming to their aid. 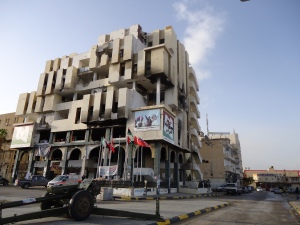 The Libyans’ newfound freedom came at a very heavy cost. For example, while in Misurata, we did not meet a single Libyan who had not lost a friend or relatives or both to the conflict. Driving down the renowned Tripoli Street and surveying building after building in ruins, it was not hard to understand the impact on the people of this seaside city, the third largest city in Libya. We visited no less than three “martyr museums” in three cities, dedicated to those who had lost their lives in the struggle and the excessive brutality that had been arrayed against them.

Over 11 days, through workshops and meetings in Benghazi and Tripoli, as well as small group meetings in Zawia and Misurata, we met with a variety of people, from governmental officials to civil society groups to youth and taxi drivers to discuss the lessons from other countries in transition and asking a number of questions: What is your vision for Libya in five years? What are the main strengths of the justice and security system and challenges that lie ahead? And, when legal disputes arise, what mechanisms are being used to resolve the dispute?

Discussions in Benghazi on rule of law in Libya

In the workshops in Benghazi and Tripoli, the participants created a list of priorities in the short, medium and long-term. They also suggested how outsiders can support their efforts at building a Libya that is just and secure. It was an honor to work with them as they take the first tentative steps toward a just and free society based on the rule of law.

Compared to other conflicts, Libya is doing OK given where it has been. We heard over and again how its culture, customs and traditions are what have held it together thus far. We witnessed this firsthand during our travels.

So when the gun fight erupted down the street, I knew there was the risk of it spiraling out of control. Not the gunfight so much. But experience has taught me that this would be a story that would splash across the news for days to come and overshadow the real story of a new, optimistic and free Libya, now struggling to its feet — warts and all.