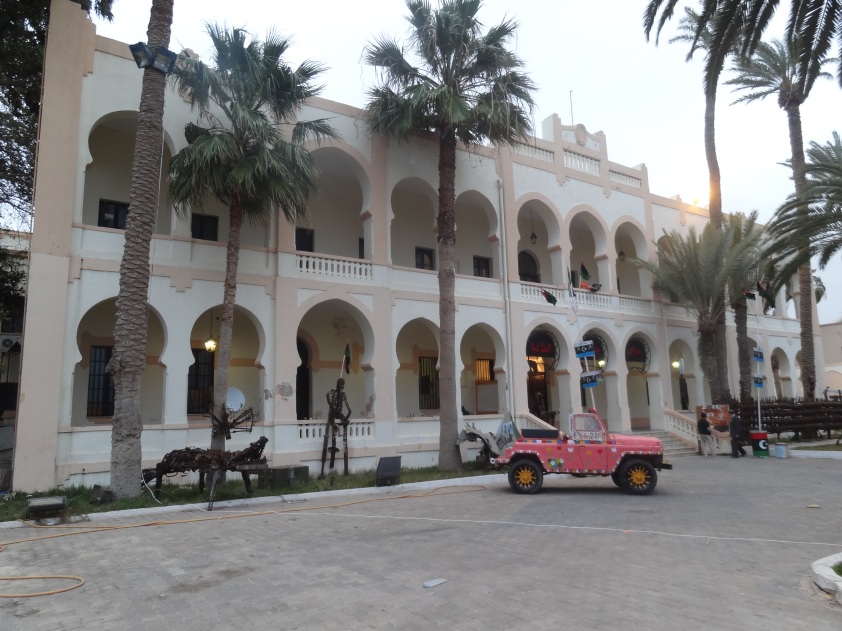 Here is a piece that I wrote and was posted on USIP’s website so I am cross-posting it here.  Also set forth below is a photo slideshow of the museum.  Here is the link to the article on the USIP website:

Transforming Conflict through Art in Libya

After being gutted by fire during the revolution, with the ground floor walls still bearing the scorched marks of conflict, Benghazi’s war and art museum had been created on the spot following the end of Muammar Qaddafi’s 42-year rule. In generations past, the building had been a luxurious palace dating centuries back to the era of Italian colonialism.

Benghazi sparked the revolution, but the city that looked modern on the surface, as I would learn, had been neglected for decades by the dictator for its role in fostering dissent throughout his reign. Driving around, I could see roads and buildings left as they essentially were in decades past. Yet underneath all this, was the heart and spirit of its people.

As we approached the museum, a car painted pink with flowers came into view in its courtyard, interspersed among sculptures and other items. As we entered the palace-turned-museum, we were greeted by Salwa Al-Tajoury, a charming and effusive Libyan who had painted the car.

As she guided us through the recently installed sculptures, paintings and exhibits, she told us how while residing in France, she became so moved by the stories of courage and valor coming from her native country, Libya, that she felt compelled to return to help her people free themselves from Qaddafi.

After the liberation of Benghazi, she met Ali Al-Wakwak, an artist, who under the former regime had been prohibited to work as an artist. She found herself captivated by Al-Wakwak’s unique art, sculpting of driftwood to create wonderfully expressive likenesses of Libya’s famous nomadic Touregs.

She was also impressed with the artist’s resilience and resourcefulness amid the conflict. During the violence, Al-Wakwak turned his skills and artistry toward crafting homemade weapons to help equip his out-gunned friends and neighbors in their battle to turn back the more heavily armored and well-financed arsenal against Benghazi.

Now that the fighting was over and Benghazi was free, Al-Wakwak pivoted back to being an artist, now using the detritus of war to sculpt artwork chronicling the horrors of it as well as the promise of humanity.

Salwa told us of how, after the heaviness she felt upon seeing so much death and destruction during the conflict, she saw Al-Wakwak’s transformation from artist to warrior back to artist, and how art could also be her pathway back from depression to humanity.

““It’s a very important message to the wounded, the people who lost their legs or an arm. They got depressed because they’re so young and they lost limbs. So he just wanted to give them the message that even if you are broken, your life is not over,” she told me. “Your life continues and you can be a part of the country. This is the message. That is why he loves the broken things because we all have this, like these failures and these scars inside.”

She added: “Art was my therapy. I was depressed before I did the car. When I did this car, I saw the smiles of the children once more and the people. And the energy I get, when you receive positive energy from people, it rebuilds you and you have the feeling to do something important.”

She said that when she returned to Libya, she was not prepared for what happened. She didn’t expect war. She thought it would be like what happened in Tunisia or Egypt. So when she saw the planes bombing people, the tanks firing indiscriminately into neighborhoods, and the mercenaries raping their daughters and wives, her vision of a peaceful transition to democracy was shattered.

She still hasn’t come to grips with the fact the violence is over. But despite what she witnessed, she was glad she had come back to play a role. Salwa felt that she was able to help her people in some small way and she could have never remained in the safety and comfort of her home in France while her people were dying and suffering for such a worthwhile cause.

Before leaving Libya, I returned to the Benghazi art museum. And there was Al-Wakwak, with his welder in hand, hunched over an object that he was forming, sparks flying everywhere. As I peered over his shoulder, I saw that he was putting the finishing touches on a donkey. On the ground was another sculpted figure standing proudly. I looked at the two and realized I was seeing Don Quxiote and his trusted donkey — constructed of bullets, casings, bearings and other military hardware — ready to tilt at windmills. I smiled at the symbolism.

So in addition to the fond memories of my visit to Benghazi and the museum, I have also brought home Don Quixote and his Donkey, a permanent reminder of the power of art to transform conflict.