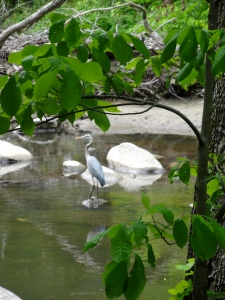 We took a wonderful bike ride last weekend through Rock Creek Park.  The weather was amazing. I had just returned from a wonderful but very intense week in New York City for work. Along the bike ride, I came across a beautiful heron in the water and took a photo. There were also many robins along the way landing in the road and chirping. During my bike ride, I felt the peacefulness of nature and reflected upon the past week in New York City and everything that had transpired.

My colleague Teuta and I traveled to New York City as part of an ongoing project called, “Voices from the Field: Rule of Law through the Eyes of the People.” The Voices project gathers personal stories of people from around the world who have lived through war and are dealing with its aftermath. From Afghanistan to Iraq and Liberia to Nicaragua, and other conflict-affected areas, the Voices team interviews soldiers and civilians, officials and rebels, United Nations staffers and NGO activists to get their candid opinions on the country’s legal and security systems, to hear their often harrowing personal experiences of conflict, gather lessons learned and to discover what the rule of law means to them.

All too often, rule of law practitioners from the international community work tirelessly in post-conflict countries but fail to understand how the local people actually view the concept of “rule of law” and the international efforts intended to foster it.  What the practitioners believe is important to the people is often very different from what the people themselves deem important.  A similar divide typically exists about the role the practitioners are playing.  This perceptual disconnect is not merely unfortunate; it can seriously hamper peacebuilding efforts in post-conflict countries.

There is almost no published material that documents this phenomenon.  What does exist is fragmentary, dry, and usually buried in research or policy papers that focus on other subjects and are read by very few people.  Insofar as they are presented at all, the views of both practitioners and locals are typically stripped not only of their political and social context but also of their personal and emotional resonance.   If policymakers and practitioners are to design and implement rule of law programs that harmonize with local concerns and priorities, the international community needs to hear the real voices of the people in the field, locals and internationals alike, expressing rich, full expressions of personal experiences, expectations, and hopes rather than uncontextualized snippets.

The full impact of violent conflict and war on local populations is not well understood. Societies emerging from conflict are typically marred by wide-scale trauma. This trauma not only negatively impacts the lives of individuals but has broader community and country-wide ramifications. It is now understood that a failure to address and build resilience to the individual and collective trauma amassed during conflict can lead to a continuation or re-occurrence of the cycle of violence, thus negatively impacting international and national efforts to establish justice and security and build lasting peace.  Further, through the cycle of conflict, combat soldiers, peacekeepers, humanitarian aid workers and post-conflict reconstruction personnel operate in zones of conflict that are inherently stressful.  We have also seen relief, development and other peacebuilding-related workers who exhibit trauma-related effects resulting from their exposure to the consequences of conflict.

Additionally, those who help victims of violence and those who help to rebuild after war, not only face trauma wounds but injury and death.  Understanding this, they still commit their lives to building rule of law and helping others.  Bringing home the risks that civilian peacebuilders face, while meeting with a UN official in New York, that a colleague and friend of ours, Joakim Dungel had been one of the UN staffers killed in Afghanistan last month when the UN compound was over run by an angry mob during a violent protest sparked by the Florida pastor’s Koran burning. Joakim was a human rights lawyer whose passion and commitment to peace and justice led him to Afghanistan. Dedicated to excellence and being effective, he had been a participant in USIP’s Rule of Law Practitioner’s Course and a member of the USIP-sponsored INPROL (International Network to Promote the Rule of Law).  The news hit us hard and we felt the gravity of the work we do and the risks our colleagues take every day in trying to build the rule of law.

The interviews in countries suffering from war and conflict coincidentally intersected with the trip to New York City. Since its inception, Voices has chronicled the stories of people in other countries who had suffered due to violence and war and the devastating loss of human life.  Now, we had the opportunity to interview people in our own country who continued, nearly ten years later, to be affected by the impact of what happened on September 11, 2001.

Initially, our trip to New York was focused solely  on international actors and United Nations staffers who had worked oversees in war-torn places like Afghanistan, Haiti, Iraq and Sudan.  Unbeknownst to us at the time, as we prepared to leave for New York, a team of elite Navy Seals was descending on the secret compound of Osama Bin Laden, killing the world’s most wanted terrorist. (Later in the week, I was called to be on ABC Radio Australia to answer questions about the legal aspects of the killing.) 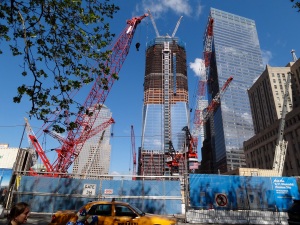 As a result, we found ourselves among the throngs of people who came to Ground Zero to honor the victims of 9/11 and capture a glimpse of President Obama.  Upon arriving at the historic site, we approached a couple taking photos of the “Flag of Honor,” listing the names of the 3000 victims of 9/11.  As we interviewed the couple, we learned that the man was Swedish, just like our friend and colleague Joakim. We asked him about what brought him to Ground Zero. He said he wanted to see the flag with the 3000 names.  “I am Swedish and I know exactly where I was on that day.”  “…[a]ll these people were innocent…Bin Laden killed people who were innocent….These 3000 people. 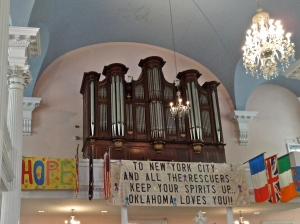 We went to St. Paul’s Church, right across from Ground Zero, to light candles for the Joakim and the 9/11 victims.  The moment we entered the church, seeing a tapestry with “Hope” written on it, a banner of support to New York and all the rescuers from Oklahoma, a table with memorials, photos and mementos, caused a rush of emotions, requiring that we sit with our tears.   We watched others do the same.  Some people entered the church, left flowers on a railing and walked out.   We lit candles, stood in silence and continued our journey outside the church.

As time went on, the security in the area rapidly increased.  Teuta and I were impressed with the professionalism of the New York Police. Despite the high security situation, they were very approachable and helpful in directing people and answering questions about when the President would arrive and where to stand.  It seemed within minutes, the area in which we were was swarmed by Secret Service agents and NYPD counter-terrorism police. We were standing by three post boxes with a group of journalist when a bomb sniffing dog and his handler approached. Just minutes before, a Postal Worker had opened the boxes to remove mail. Overhearing the conversation, we learned that out of an abundance of caution, the police wanted to have the boxes reopened to be sure nothing had been planted.  So the Postal Worker was tracked down and asked to re-open the boxes.  The dog went through them and in the last one, sat down. This required the handler to call him out.  Given the incredibly heightened security, we knew that the President’s arrival was imminent.   So we watched the crowd cheering, waving American flags and excited that even if the President was not making a public appearance, just the fact that he across the street at Ground Zero, was enough for us.

(Thank you to Teuta Gashi for her contributions to this piece as we worked to get down and process our thoughts on the train ride home.)