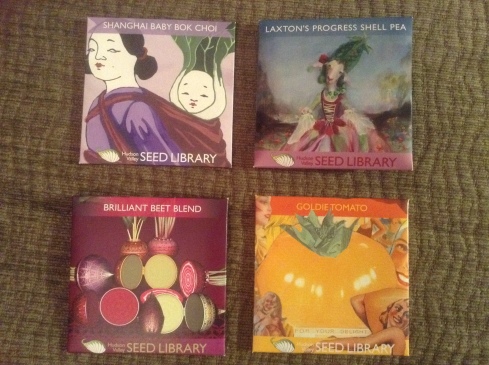 Snow. It snowed today. We even set a few records for the level of snow this late in the year. But no worries at my end.  I have an entire greenhouse operation going on inside my house.  Over the past few years I started indoors a few things from seed, including tomatoes and peppers. But lack of space and my cat made the endeavor very challenging. After Hagrid (the cat) ravaged my tender seedlings a few years ago, I ended up setting up my system in a small area in my living room using a big cage with clip on grow lights and warming pads.  It did the trick but greatly limited me in the amount of seedlings I could grow.  It was also difficult to regulate the temperature and the peppers had a hard time, resulting in a meager yield of survivors. But this year is different. Thanks to my husband who did some renovation in our upstairs half floor attic, I have more space and with it, more ambitions for the growing season.  I ordered a multi-shelf covered greenhouse from Lowe’s that I had coveted over the past few years.

Seeding tray and my seed packets.

Then I got my seeding supplies ready and began planting.

Patrick and Hagrid building the little greenhouses from IKEA

During a trip to IKEA, we came upon little greenhouse units and picked up a few of them.  Then over a  few weekends, we collected an assortment of grow lights. One professional grow light was picked up at a local hydroponics store and the owner gave us a great discount on a super cool unit in addition to some excellent growing advice.  I learned that the key is to get florescent lights that are “daytime” intensity.   I also learned that LED lights are the best but also the most expensive.  The other grow lights I purchased from local hardware stores included a collection of  inexpensive under the cabinet style plug in florescent units and small clamp on shop lights. 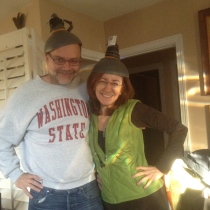 What happens when you spend too much time looking for grow lights. Loved these clamp on lights. 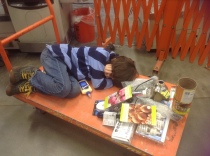 My son. Worn out by the grow light shopping marathon.

Then I rounded out my purchases with a few new seedling heat mats since I only had two and needed a few more.

IKEA Greenhouses with tomatoes and peppers (3 weeks after planting seeds) 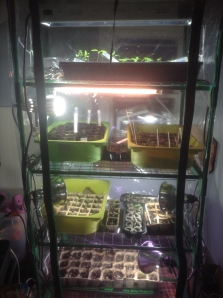 Just over one week after planting seeds.

Ta da!   Three weeks later I got four varieties of tomatoes, two varieties of sweet peppers, beets, baby bok choi, lettuce, kale, swiss chard and basil growing strong. As soon as the snow clears, I will get the kale, swiss chard, beets and baby bok choi into the ground under the hoop cold frame in my community garden.   Then I look forward to moving the tomatoes, peppers and basil into the outdoor greenhouse to begin the hardening off process before the last frost date (estimated to be May 1). Now back to today.  Snow.  Lots of snow.  Hard to believe that in just a few weeks, we will see the buds of Spring. 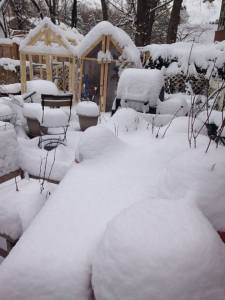 Today’s snow. The outdoor greenhouse and the “add on” greenhouse started over the warm weekend, waiting for another warm day to be completed.