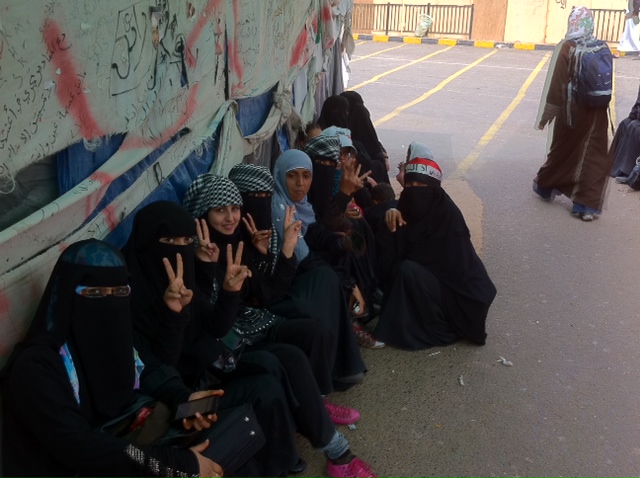 I have been so honored and privileged to be in Yemen and have the opportunity to meet so many wonderful Yemenis over the past few days who are working to build peace in their country. It was also very interesting to arrive in Sana’a the day before an agreement, the GCC Initiative, was signed between the President and opposition parties whereby the President would step down from his post and a coalition party would govern. For all Yemenis, I hope this is the beginning of a peaceful transition that will see Yemen as a model for justice and rule of law.

Here is a quick piece that my colleague Manal Omar and I put together on today’s events:

November 2011 | On the Issues by Manal Omar and Colette Rausch

Manal Omar and Colette Rausch are in Sanaa, Yemen meeting with a wide range of stakeholders from across the social, economic and political spectrum to learn the approaches for building peace.

How has the news been received on the streets of Yemen that President Saleh will cede power?

The Gulf Cooperation Council agreement signed between President Saleh and the Yemeni opposition sets forth a gradual plan to transfer power from the president to a national unity government. This comes on the heels of popular uprisings in several governates across Yemen that led to a standoff between pro-government and opposition members. There has been a wide range of responses to the agreement, which took many by surprise.

Despite news of his trip to Riyadh, many Yemenis with whom we spoke believed he would not sign the agreement because he had promised to sign the agreement but decided not to do so. Although there is a strong consensus that the nine-month standoff needed to come to an end, there are still many concerns about moving forward. The concerns most often raised come from the youth, who comprise more than half the country. During interviews in Sanaa, youth from different governates expressed concern that the original issues that led them to occupy public squares may not be addressed, given this was a political negotiation that included provisions with which they did not agree, most notably the immunity granted to Saleh.

Opposition leaders understand the concerns expressed by the youth, but have emphasized the agreement is the first step in a gradual process that will lead to long-term change. They also recognize that compromises were crucial to ensure a peaceful transition and to avoid violent confrontation or civil war.

What are the immediate challenges for implementation?

Many Yemenis we talked to believe the potential for Yemen to provide a new constructive model is high, benefitting from lessons learned from other “Arab awakening” transitions. Naturally, there also are many concerns. One of the first concerns raised was whether Saleh will truly leave the political scene or continue to be active in the political life of Yemen – or even support efforts to impede progress. There also is a strong concern people expressed that the new national unity government must maintain national unity and move forward with the implemention of the process as outlined. Further, that they must avoid political infighting and stalemates.

The youth fear they will continue to be marginalized, and that this will be a change of the regime but a continuation of the political process as usual. Some women fear there will be an unwinding of the progress they have made. Despite the concerns expressed, one thing shared by all groups is that there will be a successful transition leading to a peaceful Yemen. All agree that it will be challenging, but that it is just the beginning. As with many transitions, it is difficult because people will need to have patience and manage expectations, but at the same time tangible change will need to be seen.

What are the immediate next steps for Yemen?

The national unity government must demonstrate transparency, openness, and an inclusive process – and that it is not business as usual. This includes dealing with a host of immediate problems, including the North-South divide, further fragmentation, ensuring that their is an interated national army protecting and serving the security of all Yemenis, and establishing a system of fair and equitable governance over all of Yemen.

The GCC agreement grants immunity to Saleh, it does not eliminate other options for the development of accountability mechanisms to address past crimes, human rights abuses, and corruption. The general sentiment across the board is that the principles of justice and accountability should not be lost. Yemenis have expressed the need for an independent system of justice that is trusted by the public. There is a need for a process for achieving justice and accountability, but in a Yemeni context determined by Yemenis in a national dialogue. Youth want to ensure that they are at the center of this dialogue and have more than just a voice. They expect an active decision-making role.

Yemenis are determined to reverse the negative stereotypes of them as terrorists, drug abusers, and citizens of a failed state that they feel has been perpetuated in the last few years. In fact, during interviews the level of sophistication of the youth movement, civil society, the political debates, and the commitment to a new future taken place is a positive indicator of the potential for a positive outcome. Yemenis have expressed a commitment – and demonstrated an ability – for putting the interests of the nation above any individual interests. The best thing external players can do for Yemen is not to impose solutions, but is to provide space and resources for this movement to grow and support an enabling environment for the emergence of local leadership.

One thought on “Yemen in Transition: Signing of the GCC Initiative Today”