This past Sunday was a big day for preparing for the winter.  (Yes, a bit hard to grasp the concept of frost and mittens given we were on the heels of a heat wave that set records and nearly wiped out my bean plants.)  But nonetheless, like the friendly squirrels that run about our yard (and dig up my lettuce time to time in order to plant their acorns), I knew that summer harvests could be perserved for the upcoming winter.

My plan included cooking up a huge batch of minced meat with peppers, onions, eggplant and herbs so that we could have some for dinner this coming week but also so I could freeze enough for a few dinners come November. 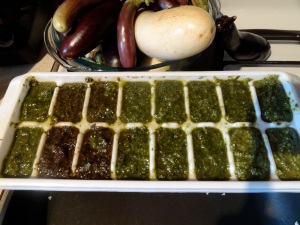 I also wanted to make multiple batches of pesto so I could freeze some for the winter by using ice cube trays and, when done, pop the pesto cubes into freezer bags. I used a number of pesto varieties from purple to green to varigated, resulting in different shades of pesto.

Further, my eggplant and green bean harvest surpassed our intake capacity, so I was excited to learn how to blanch and freeze for winter. So it was a big day and I was ready to get started.  I decided to start on the minced meat first.

Nano seconds after I began to cut the eggplant, I cut my finger.  I quickly was transported to my little (well not so little as you will see when you gaze at the photo) burn injury on my calf from last week when I backed into the broiler pot that had just come out of the oven and had been placed on a foot stool due to the micro kitchen counter space I have. (I waited to post a photo until it was healing nicely to spare the reader.)

With nothing more than  a 1960’s vintage wall air conditioner unit that blows only enough air to slightly cool down about half of the living room, the kitchen is always balmy (somewhere around 90’s throughout the summer).  Add a bit of cooking, a confined space, multiple pots simmering on different time schedules……and well, you get the picture: the brain is less than focused and “ouch!”accidents happen. So after bandaging my cut, I decided that I needed to practice mindfulness and focus on the task at hand.  Not an easy endeavor for a person like me. I am usually juggling multiple balls at once, while my mind darts from topic to topic.  I then start thinking about all the things that need to get done the coming week and get caught up thinking about world events. My mind generally wanders about while I am cooking. So to practice mindfulness, I took a deep breath and steadied by attention on cutting. Just cutting. Slice after slice of eggplant. I was in the eggplant moment…..

Eggplant Blanched and Ready for Freezing

As I was just concluding this blog entry, my husband Patrick called me to the window to see a very hot and tired squirrel lazing about.  Did I mention the intense head wave we are having here in Washington, DC?  I took one look at the squirrel and smiled. I am with you little squirrel and was ready to plop down myself after a very full day of cutting, cooking, freezing and preserving. And perspiring.