It was a tough weekend. Recovering from a major sinus infection and, never having had one before, I waited until it was full blown before I went to the doctor. Now, how was I to know that the fact that I could not open my mouth very far, could not chew without pain and everything I ate tasted like rusty metal was a result of a sinus infection? I have never had one so how was I to know?

Further, if I ever thought of one, it was with the assumption that the pain was around the forehead and nose, not the jaw for goodness sakes. I am not big on going to the doctor and usually just brave things out and let my body deal with it. But the day before my scheduled departure for Iraq, colleagues pressed me to get it checked out rather than wait until I got to Iraq to see how things developed. So I called my doctor who graciously squeezed me in, diagnosed the infection and prescribed antibiotics as a necessity not an option (given my adversity to antibiotics except when absolutely critical). Consequently, my scheduled trip to Iraq was not to be. I was very bummed as I was really looking forward to going. But there will be another opportunity….

My energy levels were not optimal but I am not so great at taking it easy so I figured cooking would be a good thing to occupy myself with. I decided to make a balkan dish that my friend Teuta had made many times. So, I chopped up the Community Supported Agriculture (CSA) onions and garlic.  I sauteed them with olive oil, pepper and salt. Then added the cubanelle peppers from my community garden plot, a yellow pepper I bought and some oregano, basil and marjoram from my backyard container garden. 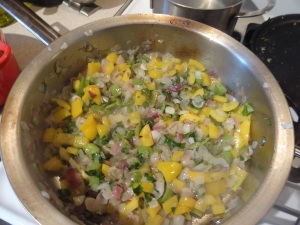 While that was going on, I blanched in boiling water for a few minutes the squash that came from the CSA.

So all seemed to be going well. Despite my illness and low energy levels, I was holding my own. Until I set the spatula on fire.  You know, I just don’t know what happened. I have set wooden spoons on fire before.  One burned right through so I had to toss it. But the spatula was metal. I guess I just had too much going on for my half functioning self. I admit that I did notice that flames were shooting out from the pot of water that I was boiling to blanch the squash. But I must also admit that I thought it was strange but my brain was not functioning at its full level so nothing registered on the first flame sighting. It was not until the smell factor kicked in.  Ahhh, then my brain got it because it had sight and smell to work with.  My really cool metal spatula had flames shooting off it and something was burning to a crisp. Apparently, the morning’s eggs (from the CSA) were still on the spatula and that and splattering oil from the meat was enough to start the little bon fire. After rescuing the stapula, I sadly looked at it and wondered whether all that charred mess would clean off.

Vowing to be more careful, I turned to draining the cooked ground beef. I lifted the heavy pot to drain the liquid into a container. Well, this did not go so well. Somehow a piece of very hot ground beef was released and landed on my exposed toe. I screamed. Shock more than pain. Then Gnogi the Corgi ate the evidence as it bounced off my toe. At this point, I wondered if maybe even cooking was a bit too much for me. But I was too far into the process to give up.  So I soldiered on. I combined the vegetable and meat, added some tomatoes that my friend Elizabeth and I had canned last Fall and cooked all that down.

The meat mixture was then layered with the sliced squash and everything went into a beautiful red Crueset pot that my husband and son graciously got for me for Christmas.  (I know because I made it abundantly clear that I wanted THAT pot for Christmas and nothing else could make me happier. Sad but true. A pot for Christmas was number one on my list. Who knew when I was younger that it would come to a stage where all I wanted for Christmas was a cooking pot. But anyone who knows about Crueset cookware knows that it isn’t just any “pot.”) 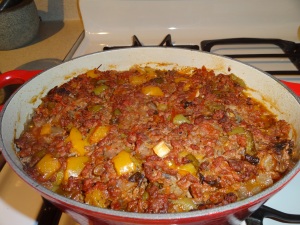 The Crueset then went into the oven and we had dinner. End of story. Oh, and I also managed to make a salad with lettuce from our patio and porch containers together with tomatoes from the community garden plot. All is well. No further fires or injuries. Now I look forward to the time when my jaw is pain free and the food I eat no longer tastes like rusty metal. 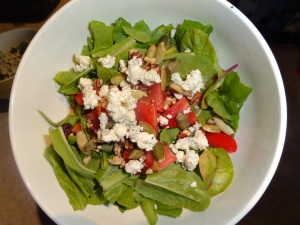